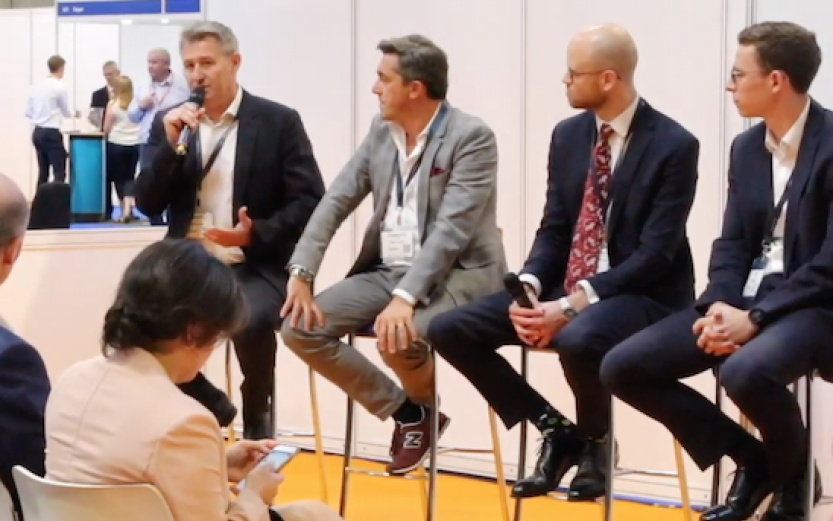 “Unless you understand the investor point of view, decarbonisation won’t happen”

The success of efforts to decarbonise economies in the UK and elsewhere could hinge largely on how governments and business communities – particularly large commercial lenders – engage with the sector in 2020, a UK-based financier of solar and storage has said.

On stage at the exhibition and conference, which took place in the latter part of 2019, the sneakers-wearing former Royal Bank of Scotland funder of solar projects had said that the growing market for energy storage was both challenging to make stack up economically but also “more exciting” than the kind of solar projects he had helped fund for more than a decade.

Many of the latter had no more complex a financial impetus behind them than subsidy schemes such as the feed-in tariff (FiT) and Castiglioni has described funding for standalone PV as becoming something of a “race to the bottom”.

Castiglioni gave his views on 2020 and what lies ahead in decarbonisation and the energy transition in a recent interview with Energy-Storage.news.

“What I’m hopeful for, is governments taking a strong position on decarbonisation. The Targeted Charging Review (TCR) in the UK from [national regulator] Ofgem, kind of killed the market for behind-the-meter energy storage and behind-the-meter solar. That’s not something we view as positive for decarbonisation of demand,” Castiglioni said.

“Hopefully, governments will start walking the walk. We see the energy storage side [of decarbonisation] becoming more efficient, we see prices going down and applications being deployed at the larger scale of what has been done.”

Technology and finance trends set to make a big impact on the industry this year, the financier and advisor said, will likely include:

“We see that as a big thing,” Castiglioni said, for 2020, although in his view, vehicle-to-grid (V2G) won’t become the mainstream within this year, or is unlikely to, despite deployments gradually starting to become a trickle of activity after years of expected potential.

“[V2G], there are still some issues to be worked around. I don’t think 2020 will see a lot of progression on that. I feel that we really need to go large on EV charging, and then we can think about vehicle-to-grid. There are a lot of things to think about for the networks. These days we don’t have the numbers yet of vehicles into the grid [for it to really count in 2020].

While V2G will “definitely” become a much more common application for EV owners and fleet operators, Castiglioni’s view is that this is likely to gradually become mainstream over the next five years as innovations develop and manufacturers become more comfortable with warrantying batteries and cars for V2G use.

There’s been a gradual shift towards including hydrogen in the conversation about renewables, storage and the flexible energy networks of the future over the past couple of years. Castiglioni said Ikigai Capital sees this as one of the year’s other big topics.

Perhaps more aspiration than prediction, in a more general sense, Roberto Castiglioni said that “unless you deliver value to the shareholders and the stakeholders, decarbonisation is not going to happen.”

Asset owners want to know if they’ll be holding the deeds to stranded assets in the very near future and Castiglioni said the example of former UK Bank of England Governor Mark Carney going to the UN as a special advisor on this topic was a strong indicator that the business communities of the world are as hungry for knowledge as the pro-renewables groups and environmental groups are for immediate action.

“[Carney] has the right skillset, the right mindset. Him going to the UN as ambassador on this topic is a good thing. Because unless you understand the investor’s point of view, decarbonisation is not going to happen.”

Both project finance and debt finance will have strong roles to play in funding decarbonisation and related projects, Castiglioni said. This is the case and will likely remain so for solar and increasingly for energy storage. Other technologies and project types, such as energy efficiency or even carbon capture, which might offer more in the way of savings made rather than revenues generated, might benefit from other structures such as asset finance.

“The banking market needs to move towards that as well. We [at Ikigai Capital] are talking with one smart and flexible, forward-thinking German bank, working with them to find out other potential banking instruments and products that can support the decarbonisation piece.”

Asked whether investors can really get comfortable – or even excited – about the returns on offer in this new and sustainable paradigm, Castiglioni said banks and others are realistic about what can be achieved.

“It’s all about making the technology bankable, the right allocation of risk, having the right track record, being forward looking,” Castiglioni said.

“But then you can structure a product that can support that. In 2020 we will be looking at that closer working relationship with commercial lenders.”